We have just received this jazz guitars review regarding the first two jazz guitars made by Richard Morgan in Australia. These guitars use the body of the mandocello but with standard scale, neck and strings setup of a jazz guitar. Newer instruments will use a re-designed body as you can read here.

Here is the review:

Playing Richard’s guitars is like playing no other. The depth of tone and volume the instruments he produces puts them in a league of their own.

Richard has successfully evolved the concept of the humble acoustic instrument firstly by developing the ‘radiating soundboard’ and more recently by developing the ‘floating soundboard’. Richard has been on a quest for the holy grail of acoustic instruments for the last 30 years and personally I believe he has reached his goal.

Richard’s instruments are not only capable of great acoustic projection but also variable tones through the changing of soundboards, from deep tones for jazz, crystal clear tones with a clear fundamental for classical and tones with a vast array of harmonics for contemporary.

The unique neck design means that the instrument will never need a painful neck reset procedure nor will it ever move due to the carbon fibre laminated into the neck, allowing it to last generations. Another feature I have personally stumbled across is the instruments’ ability to project toward their audience rather than deafening the player. Whilst the player can still hear what is being played, the main projection is toward the listeners and has been tested in recital type settings.

I highly recommend Richard’s instruments to any performing player of acoustic instruments whether the preference be within the jazz, classical or contemporary styles. 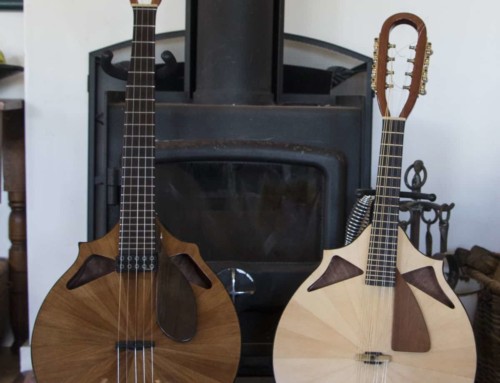